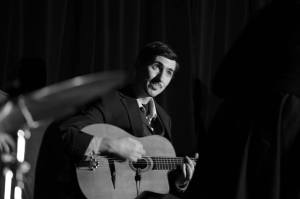 Andy MacDonald is a jazz guitarist and singer based in Montreal. After completing a BMus at Humber College in Toronto (2011), support from Canada Council for the Arts enabled Andy to compose music and study jazz manouche techniques in France and Montreal (2013/2014). As guitarist / singer / banjoist, he has performed with many artists including Denielle Bassels, Denis Chang, Alex Pangman, the New Orleans Swinging Gypsies, Climax Jazz Band and Drew Jurecka. Andy has performed throughout North America and Europe (Paris, London, Amsterdam, Stockholm, New Orleans, New York).

As a creative improviser and composer, Andy has written and recorded original music with his group Les Petits Nouveaux. In 2017, the ensemble released their second album which was recorded in Toronto and Stockholm. In 2018, the group was invited back for a 3rd visit to Sweden. In 2019, with support from the Canada Council for the Arts, Andy released his debut solo album, Asking for A Friend with a 7 piece ensemble of Montreal musicians.