Other entries in this series:

I cannot believe it has been a week since I landed at Louis Armstrong Airport – time has a way of melting through one’s fingers here. And rightfully so – it’s been a balmy 95 degrees most days, and hovering in the 80’s at night (for Canadians: 35C most days, 25C+ most nights). In my first of five weeks in New Orleans, I acquainted myself with some of the customs and rituals of this fine city… mostly listening to /playing music and eating great seafood. Each day, there are no less than about 50 live gigs to chose from(!!)

The sole reason for this trip is to become inspired by the music, people and culture. After my five weeks in NOLA I will head to the Banff Centre for a two week musician’s residency and compose music for an album of original swing music. I start each day by listening to traditional New Orleans jazz, practice guitar in the early afternoon and venture into the French Quarter to listen and play in the evening. I’m fortunate to have been hired by New Orleans guitarist John Saavedra and the New Orleans Swinging Gypsies for a string of weekly gigs at Maison, Bamboulas and Fritzel’s.

While I’m down here, I want to listen to as many of the “old guard” musicians as possible: musicians who grew up here and have a deep perspective on what it means to live and play here. There’s something truly special about the energy in the way these musicians carry themselves and approach the music.

New Orleans has attracted it’s fair share of world class musicians from abroad who bring with them their own unique culture – this culture mixes with the local culture to create something new and exciting in its own rite. I hope to also listen to and interact with these musicians while I’m here.

I’ll be interviewing musicians to get their take on the music down here. The first edition of this little project is an interview with Chris Butcher:

I’ve taken a few snaps along the way to document what strikes me as inspiring – there is no shortage of inspiration for the eyes, ears and tastebuds down in New Orleans Louisiana!

my house while I’m here 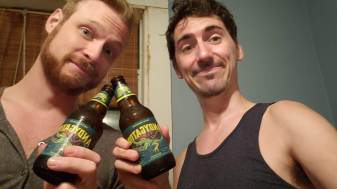 Andy Gator Beer – nothing but the best for two Andrews 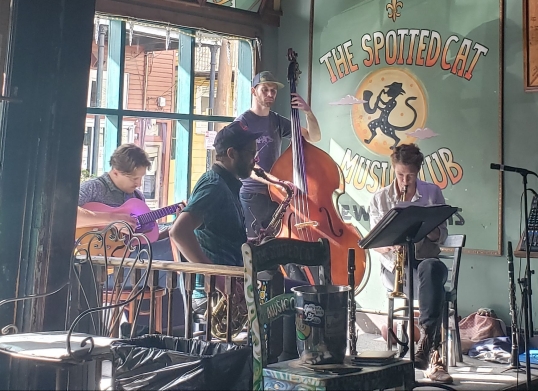 Aurora Nealand and the Reed Minders at The Spotted Cat

Thanks to the Canada Council for the Arts for supporting the album that will be recorded after this inspiring sojourn in New Orleans.